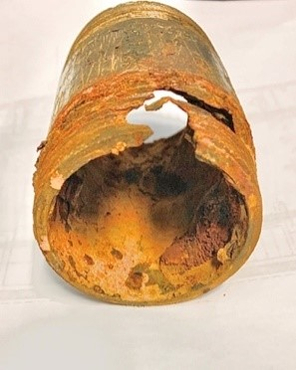 Fire sprinkler systems can be prone to a specific category of corrosion plaguing the industry known as microbiologically influenced corrosion, or MIC. According to the FM Global report “Corrosion and Corrosion Mitigation in Fire Protection Systems,” MIC is responsible for 10-30% of corrosion in all piping systems in the U.S.

In the presence of MIC, a system faces both a failure of integrity and of function. Not only will the formation of pinhole leaks lead to a system unable to hold water, but also the systems designed to flow and pressure values are compromised. Corrosion debris then builds up, and surface roughness (an out-of-spec C-factor) obstructs flow in sprinkler drops and feed mains. This corrosion-related damage reduces the reliability of the system, increasing the risk of fire loss.

NFPA recommends that sprinkler system pipes be internally inspected every five years for foreign organic and inorganic material that can obstruct proper functioning. In fact, the 2020 edition of NFPA 25 outlines a series of conditions that warrant pipe obstruction investigations. These examinations should be performed, at a minimum, at the valve, riser, cross main and branch line. If a sufficient amount of material is found, qualified personnel are needed to implement a complete flushing program. In addition, repairing or replacing any damaged pipe can be very disruptive and costly.

In areas subject to freezing conditions, a key factor that can worsen the growth of MIC is the use of antifreeze that lacks high-quality corrosion protection. Antifreeze solutions, particularly those that are glycerin-based, can add to the acidity of sprinkler system water.

Building on more than 30 years in fire protection, Lubrizol formulated freezemaster™ antifreeze, a safe-to-use, premixed freeze protection technology meeting these corrosion resistance requirements, with cold temperature protection down to -12ºF (-24ºC). However, Lubrizol didn’t stop there. Thanks to extensive expertise in metallurgy, Lubrizol invested in a series of corrosion tests in addition to those required by UL to demon­strate the superior performance of freezemaster™ antifreeze in resisting corrosion of both biological and non-biological origin.

Lubrizol contracted with one of the world’s leading laboratories in analyzing metallurgical failure and corrosion behavior, to establish freezemaster™ antifreeze’s MIC resistance versus the other listed antifreeze on the market. A screening test was developed to explore the conditions conducive to MIC. This lab then conducted accelerated testing to simulate a fire suppression system, establishing flow around suspended carbon steel coupons that had been inoculated with sulfate-reducing bacteria (desulfovibrio vulgaris). 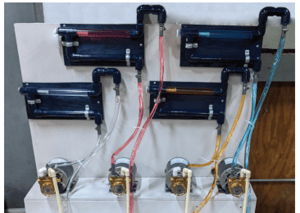 Sulfate-reducing microorganisms are common in anaerobic environments where they aid in the degradation and reliability of the surfaces they inhabit. After 336 hours of this testing, only freezemaster™ antifreeze showed no further biofouling from bacterial growth. The solution was effective in resisting the conditions conducive to a future problem with MIC.

Read the full white paper to explore all of the research.